Reasons to Be Happy

We ended the season with five straight wins.

61 points is not good enough, but it is five better than last season's total.

We reached a European semifinal.

Arteta seems to have figured out who he needs to play, finally.

Luiz is moving on, and there is some clarity about who should follow him.

As much as I wanted Arsenal to be playing in Europe next season, there is something to be said for the added time and focus on league play that can be spent without the distraction of a lower-tier cup competition.

Arteta is being backed by management.

All right, now progress has to be demonstrated.  While some additions will undoubtedly be made this window, and they will probably help, most of this progress must be generated from the players we have.  My suggestions:

Departures:  Let Lucas Torreira go back to Argentina.  I really like him, but he'd be way down the pecking order in midfield.  Sell Guendouzi for whatever we can get.  He's a head case.  Try very hard to move Willian on--what a mistake his signing was!  We can't afford Odegaard and we don't need Ceballos.  Mavrapanos is so far down the depth chart that he has to go, though I suppose another loan can't hurt.  Bellerin wants to go, possibly to Real Betis, so let him, as much as he adds to the team.  He's still got a lot of football in him, but the Arsenal phase of his career appears to be over.  I still like Lacazette, but apparently Mikel has fallen out of love and this is a good time to part ways.  Nketieh and Nelson are fine players but not what we need to get better; they might be happier elsewhere, and we might get decent money for them.

Internal additions:  Bring Joe Willock back and play him.  With a little improvement in decision making, he can be a huge asset, filling the Ramsey-shaped hole in our midfield.  Besides Willock, I'd promote Balogun to the senior team and stick him in for Auba if he's not doing the business for us.  Saliba has to be integrated into the corps of central defenders (Holding, Gabriel, Mari) that will do a good job.  If he can be happy playing fullback, I'd like Maitland-Niles there.  He was quite good.

New guys:  If we don't have a very good GK in the youth ranks ready for promotion, Mat Ryan or some other solid backup has to be found for Leno, who I still have a lot of confidence in.  Runarson is not good enough.  We have to replace Hector and get a good backup for Tierney.  AMN is one possibility, but the market may have to be tested.  Cedric is not the answer.  We have to get another ESR/Odegaard type in the midfield, someone who can combine and create.  If it's Odegaard, great, but I don't think we'll shell out what Madrid will ask.

Arsenal was one of the younger teams in the league even with Luiz, Willian, and Auba driving up our average.  It's reasonable to hope that Saka, ESR, Martinelli, Tierney, Willock, and Saliba will be as good or better next season.  I'd keep Elneny and Xhaka, though the former's minutes may be limited.  We have not seen the best of Partey.  He could own midfield for us 100% fit.  Pepe is very good and needs more time on the field.

I'm optimistic.  But I'm always optimistic before the first ball is kicked.  I think it's going to come together and we'll contend for top four, and without Stan dipping far into his couch cushions for loose millions.

Posted by charvakan at 6:52 AM No comments:

Outcoached, Outplayed, and Out of Europe

Big game, big disappointment, again.  I had high hopes for Arteta, but the man has not gotten the best out of our squad.  Worse, it does not look as though he understands his part in our decline.  I'm not going to join the "Arteta out!" chorus, because he'd certainly be replaced by a more expensive veteran past his prime who would do no better, given the people running AFC.

Posted by charvakan at 4:04 PM No comments:

Another Must-Win Game, Another Can't-Believe-It Result, Against Everton This Time

If we win the Europa League, the season will have been salvaged.  I'm not expecting that, but go ahead, football, surprise me, pleasantly this time.

Posted by charvakan at 2:29 PM No comments:

The Gunners women could have had 20 if they'd pushed for it, but in the end they settled for 10-0.  I'm not sure how Gillingham made the 5th round, but I don't know the women's side of English football.  But congratulations, Arsenal Women.

Their male counterparts were not as successful as Fulham got the close calls (I'm still not sure about that pen) and only a last minute rebound putback from Eddie Nketiah rescued a point against relegation bound Fulham.  The Cottagers were dreadful all game and it was disappointing that we couldn't put in a few (non-disallowed) goals.  Arteta rotated heavily but unaccountably played Lacazette and Saka in a game he clearly regarded as a rest opportunity, the former pulling up with what looked like a season-ending hamstring pull.  You're welcome, Unai!

The "Arteta out!" chorus on Arseblog is warming up.  I want him to be backed for another full year at least.  The critics seem to think he has a Man City level squad and he's holding them back.  He's obviously not a top manager now, but I think he's growing into the job.  He can become a really good manager here, or we can watch him do it somewhere else while we overpay some safe choice who's just been fired by another club, until he's fired.  Maybe Joe Montemurro will be available.

Posted by charvakan at 1:59 PM No comments:

After an infuriating 1-1 scoreline in the first game at the Emirates in a game we dominated, the Gunners came good in the second leg, maintaining a clean sheet while blitzing the hosts in the first half to kill the tie.  Everyone did their job, especially the front four.  Now it's two dates with Unai Emery's Villareal, who dispatched Zagreb 3-1 on aggregate.  If we can get by them, it'll probably be Man U in the final (though Roma is strong).  Hey, why not?

Well, losing to Liverpool 3-0 may be why not.  And going down 3-0 to West Ham.  These are two of the teams we had to overtake for a European spot, and one point out of six was a crusher.  Now we pretty much have to win out for a legitimate shot at a Europa League berth, though perhaps 16 points out of the 21 on offer could be enough if we get a lot of help.

I remain hopeful for the future.  If we can find a way to ditch Willian at an airport somewhere, it would be good.  There are possibilities all around.  Saliba needs to be motivated, and if he is as good as we thought he was, we don't need Luiz.  I'm surprised at how well Chambers is doing at right back.  The loss of Tierney is a blow, but he will be back next year.  ESR, if he stays healthy, is our #10.  Forget Odegard; we can't afford him.  Saka can play there too.  I wouldn't like to lose Laca, but maybe we should sell.  Willock and AMN could bring in some cash too.  Nketiah could also be on the block; the young guns we're making room for are Balogun and Martinelli.

Posted by charvakan at 3:34 PM No comments:

I couldn't help myself, and watched this game.  It's so nerve-wracking.  The Gunners were superb in the first half, and could easily have been up 3-1, but the woodwork intervened a couple times and some last-ditch defending held us to just the one deflected Odegaard shot.  Lamela's rabona was awesome, and came at the end of Tottenham's best move of the day, so fair play to them.  But they were toothless the rest of the half.

I thought we were pretty damned good in the second half, too, until Lamela was ejected.  Then for some crazy reason, we started giving the ball away, presented Spuds with corners and free kicks, and otherwise came off second best to a team that had ten men.  Kane had one in the back of the net off a free kick but was well offside, then he hit the post having beaten Leno all ends up on another free kick, the rebound being cleared by an alert Gabriel.  Thankfully, on the last free kick, Kane struck it over the bar.  This was a vital three points. 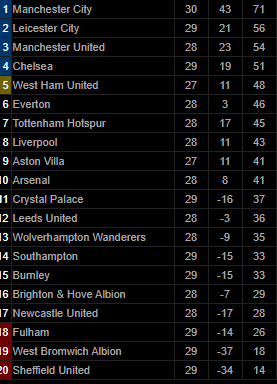 If you'd have told me that with ten games to go we'd be two points back of Liverpool, I'd have figured we
would be in the top four for sure, not tenth.  However, we could overtake Villa, Liverpool, Spuds, and Everton to finish in sixth, a reasonable goal.  West Ham might collapse too.  Chelsea in fourth is ten points better than us (we do have a game in hand) and in all likelihood too far away to worry about us.  Obviously, we'll have to win at least seven, probably eight of our remaining ten games to accomplish that.  It's a big ask.

Posted by charvakan at 12:18 PM No comments:

An Aubameyang hat trick and a rare Bellerin goal saw us through this really entertaining game.  Leeds fought back and potted two fine goals of their own, but another collapse like at Newcastle all those years ago was not to be.  (Diaby choking Joey Barton might have been worth the dropped points.)

No, this was a solid performance from the Gunners against a team that is hard to beat, and which was above them in the table before the game.  They could rise a few places before the end of the season.

We're playing Benfica in Rome on Thursday (stupid Covid).  The "home" leg will be in Athens!

Posted by charvakan at 8:52 PM No comments: